The former NFL player responded by getting down on one knee and presenting the real estate developer with a 3.5-carat diamond engagement ring valued at $85,000. The ring features an oval-cut center stone accented with pavé diamonds on a platinum band.

In the romantic lead up to the proposal, the 27-year-old aspiring sports broadcaster said, “It’s moments like this, where I’m holding your hand, I’m looking in your eyes, and I know I’m so unbelievably in love with you. You’re my best friend, you’re my soulmate." 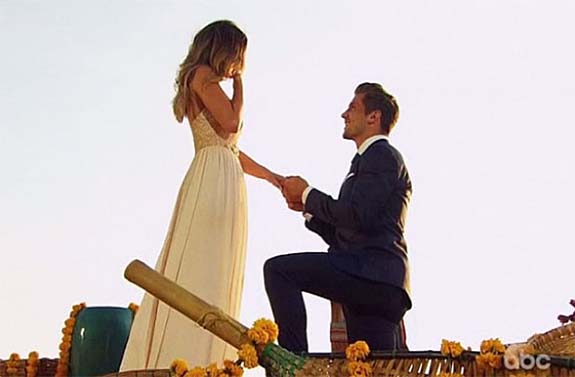 Fletcher responded by saying, “I love you so much, and I’ve been waiting to tell you how I feel. I just love you so much… I didn’t want you to get down on one knee until you knew that.”

“It’s real, and it’s been real,” he said of their whirlwind romance. “I love you so much, and I want to spend the rest of my life with you. Joelle Hannah Fletcher, will you marry me?”

An insider told Us Weekly that the oval-cut diamond ring by Neil Lane was Rodgers' favorite from the moment he saw it.

"She also loves it," said the insider, "and it's one of the most unusual and rare cut stones to be seen on the show thus far."

Earlier in the episode Fletcher, 25, was forced to send runner-up Robby Hayes packing.

Fletcher and Rodgers will get to keep the $85,000 ring if their relationship remains intact. The Bachelor host Chris Harrison was unclear about the rules regarding when a ring must be returned to designer Lane.

"There's some rule, after a certain number of years, you get to keep it anyway," he told Us Weekly. "But after months [if there is a breakup]... it goes back."

Us Weekly noted that out of 20 seasons of The Bachelor and 11 seasons of The Bachelorette, only a handful of couples have remained together, including married pairs Trista and Ryan Sutter, Desiree Hartsock and Chris Siegfried, Sean Lowe and Catherine Giudici, and Ashley Hebert and J.P. Rosenbaum. Season 11 Bachelorette Kaitlyn Bristowe and her final pick, Shawn Booth, are still happily engaged.