The Office star Angela Kinsey and her long-time beau, Joshua Snyder, are engaged. Kinsey took to Instagram last Thursday to announce the good news and to show off a non-traditional colored gemstone engagement ring that honors her new blended family. 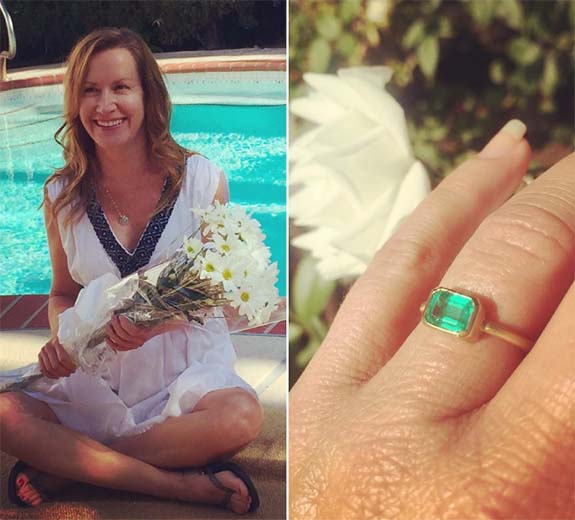 The actress revealed that the couple’s three children from previous relationships witnessed Snyder popping the question with a unique ring featuring a vibrant emerald center stone set horizontally into a simple yellow-gold band.

Kinsey posted a photo of herself and a closeup of the ring with the following caption: “The ring is an emerald because it’s all three of our kids’ birthstone. The kids made me cards and pictures and I cried. I cried that happy ugly cry. #gonnagethitched”

The sweet Instagram post also outlined how the children participated in the proposal... “We were going out to dinner and my daughter said that first she wanted to show me the fort in the backyard that she and my boyfriend’s sons had been working on. She led me outside and there was a blanket by the pool and she said I had to sit on it. His sons brought me flowers and then [Joshua] came around the corner with a ring. He had called my mom and asked for her blessing... that would have made my Dad so happy. He proposed and I said yes.”

• Kennedy’s famous engagement ring featured a 2.88-carat diamond mounted alongside a 2.84-carat emerald. During John F. Kennedy’s presidency, the ring was redesigned with more than 2 carats of round and marquise accent diamonds.

• In 2012, French film actor Olivier Martinez famously asked actress Halle Berry for her hand with a diamond and emerald engagement ring designed by Robert Mazlo. The couple split in 2015.

• In 2013, comedian and screenwriter Jason Sudeikis presented Olivia Wilde with a classic round diamond surrounded by a gorgeous emerald halo (to match her eyes). The couple is expecting their second child.

• Earlier this year, former tennis pro Ruben Torres proposed to actress Hilary Swank with a natural Colombian emerald on a platinum Art Deco-inspired setting. The ring was beautiful, but the couple split a few months later.

Kinsey is best known for her role as the uptight, religious cat-loving accountant Angela Martin in the NBC mega hit, The Office. Joshua Snyder is an actor and writer best known for his roles in Shopgirl (2005), The Glass Beads (2005) and Short Track (2008).

Kinsey was previously married to Warren Lieberstein, with whom she shares an eight-year-old daughter, Isabelle. The couple divorced in 2010.