Welcome to Music Friday when we bring you fun music with jewelry, gemstones or precious metals in the title or lyrics. Today, the Squirrel Nut Zippers sing about a gal with an affinity for fine jewelry in their irresistible Swing Revival performance of “Baby Wants a Diamond Ring.” 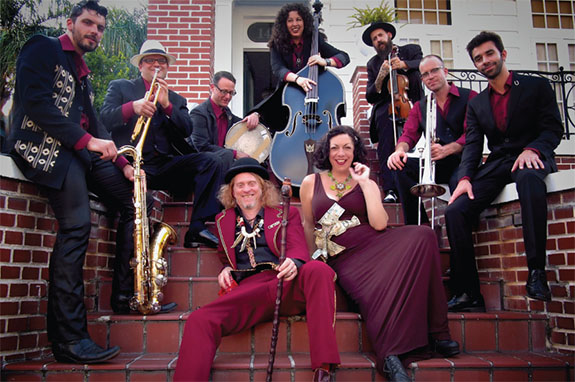 In the song written by bandleader James (Jimbo) Mathus, the protagonist presses her slow-to-commit beau to do the “right thing.” She sings, “Baby wants a diamond to have and hold / A diamond ring with a band of gold.”

Later in the song, she clarifies that although a string of pearls are “so nice,” only a diamond ring will win her heart.

“Baby Wants a Diamond Ring” appeared as the second track of the band’s fifth studio album, Bedlam Ballroom, which was released in 2000. Four years earlier, their album Hot sold more than 1.3 million copies and was certified platinum, thanks to the strong support of National Public Radio and college radio stations.

Critics have had a hard time defining the style of the Squirrel Nut Zippers. Their music has been called a fusion of Delta blues, gypsy jazz, 1930s-era swing, rockabilly, klezmer and other genres. One writer comically defined their music as “30s punk.” Another called the group a perpetually confused stew of Southern Roots and Surrealist paintings.

NPR admitted during its Morning Edition that it was not easy to categorize the music of the Squirrel Nut Zippers, except to say that it was “hot” — an obvious nod to the title of the 1996 album.

The Squirrel Nut Zippers, which were established in Chapel Hill, N.C., in 1993, are back on stage after a hiatus of seven years. Their current tour supports the 20th anniversary of Hot. Original band members Mathus (vocals and guitar) and Chris Phillips (drums) reactivated the band with a new lineup that includes several leading musicians from New Orleans as well as singer Ingrid Lucia of Flying Neutrino’s fame.

“We are humbled and incredibly excited by the initial Zippers shows since the re-launch,” Mathus told Worldcafelive.com. “It’s not a reunion, it’s a revival!”

The name Squirrel Nut Zippers is derived from a southern term for a variety of bootleg moonshine called “nut zippers.”

The band has previously toured with Neil Young and performed at the 1996 Summer Olympics in Atlanta. They’ve appeared on The Tonight Show, Late Show with David Letterman, Conan O’Brien and Dick Clark’s New Year’s Rockin’ Eve.

Please check out the audio track of the Squirrel Nut Zippers performing “Baby Wants a Diamond Ring.” The lyrics are below if you’d like sing along…

Hey there baby
I have gotten some news for you