And the Envelope, Please… Pantone’s 2017 Color of the Year is ‘Greenery’

“Greenery,” a fresh and zesty yellow-green shade that evokes the first days of spring, has been named 2017’s Color of the Year by Pantone, the world’s global color authority. The color immediately evokes Granny Smith apples and Kermit the Frog, but gem and jewelry lovers will recognize Greenery as an exact match for August’s official birthstone, peridot. 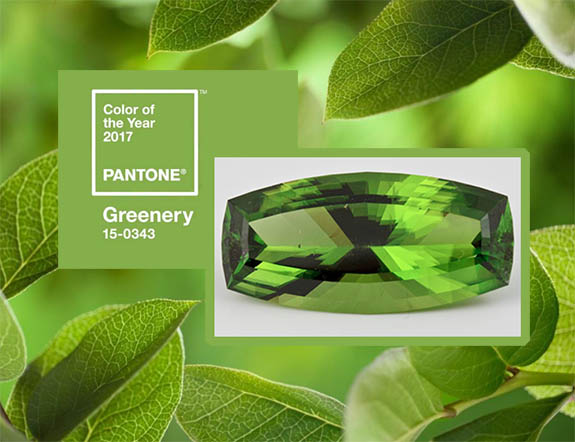 Illustrative of flourishing foliage and the lushness of the great outdoors, the fortifying attributes of Greenery signals consumers to take a deep breath, oxygenate and reinvigorate, according to Pantone. It’s a life-affirming shade emblematic of the pursuit of personal passions and vitality. 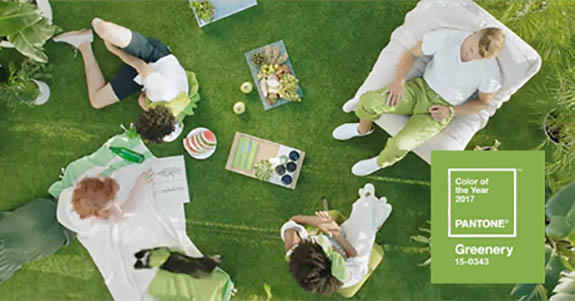 “Greenery bursts forth in 2017 to provide us with the hope we collectively yearn for amid a complex social and political landscape,” noted Leatrice Eiseman, executive director of the Pantone Color Institute. “Satisfying our growing desire to rejuvenate, revitalize and unite, Greenery symbolizes the reconnection we seek with nature, one another and a larger purpose.”

Each year since 2000, the color aficionados at Pantone have picked a color that reflects the current cultural landscape. Typically, Pantone’s selection shows up in fashion, beauty, housewares, home and industrial design and consumer packaging.

The process of choosing the annual color takes about nine months, with Pantone’s trend watchers scanning the globe’s fashion runways and high-profile events for “proof points” until one color emerges as the clear winner.

A year ago, Pantone blended two shades — Rose Quartz and Serenity Blue — to create its 2016 Color of the Year. Together, the mineral pink and tranquil blue combined to communicate a sense of wellness and peacefulness, with a dash of gender equality.

In 2015, Pantone disappointed the masses with its choice of Marsala, a brownish-red hue that was supposed to resemble fine wine, but looked more like high school cafeteria meatloaf. For 2014, the group chose Radiant Orchid, an enchanting harmony of fuchsia, purple and pink.

Here are most recent Pantone Colors of the Year… 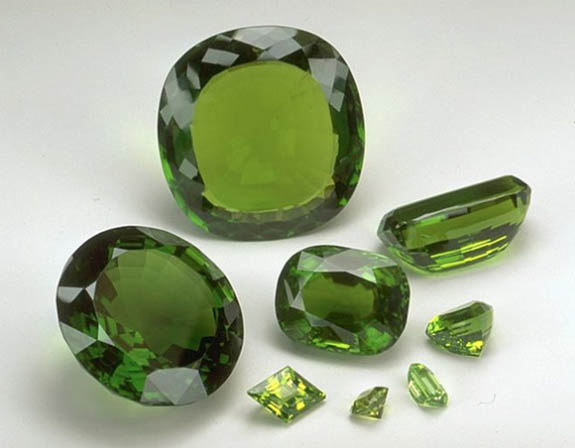 If the jewelry industry takes its cue from Pantone, store showcases will be featuring more peridot in 2017. Colors range from pure green to yellowish-green to greenish-yellow, but the finest hue is green without any hint of yellow or brown, according to the Gemological Institute of America. In addition to being the official birthstone of August, peridot is also the 16th anniversary gemstone.

Peridot is credited with being the first gem to be discovered on another planet. The Mars landing of 2003 revealed that green peridot crystals — in the form of the gem’s less-precious cousin, olivine — cover about 19,000 square miles of the Red Planet’s surface.