Star Atop the Rockefeller Center Christmas Tree Weighs 550 Pounds and Sparkles With 25,000 Crystals

Some see it as a giant Christmas ornament. We see it as a remarkable achievement in jewelry craftsmanship. The 2016 Swarovski Star sitting atop the glorious Christmas tree at Rockefeller Center in New York City weighs an astonishing 550 pounds and is set with 25,000 crystals, featuring one million reflective facets.

The star, which has six outer rays and six smaller inner rays spanning 9.5 feet in diameter, is perched elegantly at the apex of an 94-foot-high, 56-foot wide, 14-ton Norway spruce. The crystal panels weigh a total of 300 pounds.

According to Swarovski, the main surfaces of the rays are made of point-mounted safety glass, which is the same shatterproof glass that adorns the facades of New York City buildings. The crystals are affixed to the inner sides of the glass in a tight, scale-like pattern to ensure maximum brilliance.

When the star was originally created in 2004, a team of nine artisans spent 1,200 hours building, programming and testing the Star to ensure the effects would withstand the challenging winter weather conditions high above Rockefeller Center. 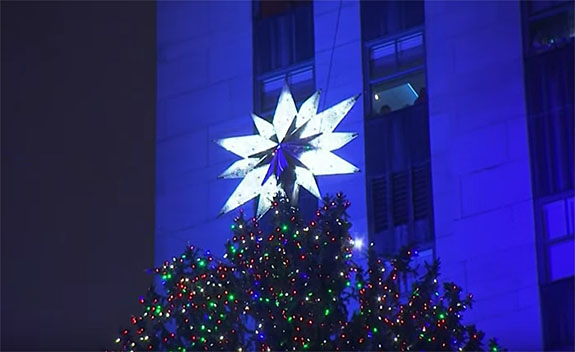 The star is illuminated by 720 energy-efficient LED bulbs that twinkle festively thanks to a customized light sequence directed by a state-of-the-art computer program. 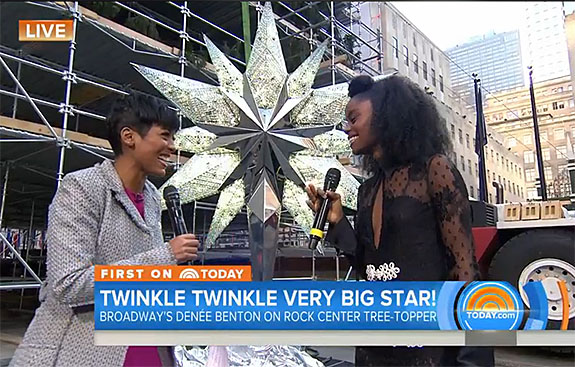 This is the 13th consecutive year that the Swarovski Star has topped the world famous Rockefeller Center Christmas tree. The star ascended to the top of the tree with the help of Broadway's own rising star, Denée Benton. The actress plays Natasha in the musical spectacular Natasha, Pierre and the Great Comet of 1812.

Benton got to press a special button that raised the Swarovski Star by crane to the top of the tree in preparation for the 84th Rockefeller Center Tree Lighting Ceremony. The tree came to life with its 50,000 lights on the evening of November 30. Thousands crowded the sidewalks for the event and millions watched it live across the globe.

A full-scale replica of the star is on display in Rockefeller Center, allowing visitors the opportunity to get a closer view of the intricate detailing and precision craftsmanship.

Rockefeller Center officially began the tree lighting ceremony in 1933, when a Christmas tree was erected in front of the then-RCA Building and covered with 700 lights. Christmas trees in Rockefeller Center have ranged from 50-foot pines to 100-foot Norway spruces and are viewed by millions of spectators during the holiday season.

The last day to view this year's tree will be January 7, 2017, after which it will be milled into lumber for Habitat for Humanity.