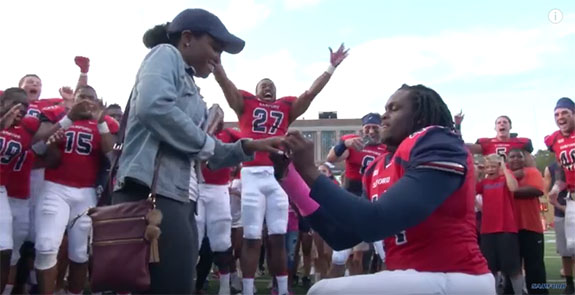 Right after the Bulldogs' convincing 55-21 win over VMI, Pierre and his squad — still in full football gear — surprised Jasmine Henderson at the 50 yard line with a choreographed presentation set to Ed Sheeran’s "Thinking Out Loud."

Henderson was clearly caught off guard when the music started to play on the loud speakers and the Bulldog players shuffled toward her at midfield with roses in hand. The players slowly danced a circle around Pierre's girlfriend.

Then Pierre entered the circle, held his girlfriend's hand and dropped to one knee. 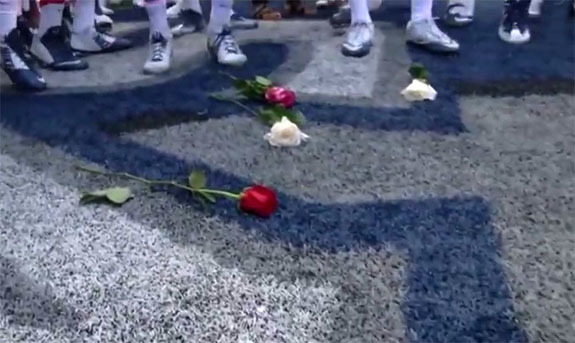 Each of the players placed a rose on the turf and tightened their circle around the couple.

Pierre asked Henderson if she would marry him and she said, "Yes." Pierre placed a diamond ring on her finger and the couple embraced.

The 6'3" 230 lb. linebacker from Pembroke Pines, Fla., scooped up his girlfriend and lifted her in the air as his teammates raised their arms and erupted in a chant, "She said yes! She said yes!"

In a video posted by Samford University Athletics, a beaming Pierre tells the interviewer about his best day ever. Earlier in the day, he had a 21-yard interception return for a touchdown and then his girlfriend accepted his marriage proposal. "Pick six. I won twice today," he said.

When asked if she was surprised by the elaborate proposal, the shy, soft-spoken Henderson said, "Yes." When asked how she felt, she answered, "I feel great."

Pierre told WBRC.com that when he met Henderson it was love at first sight. 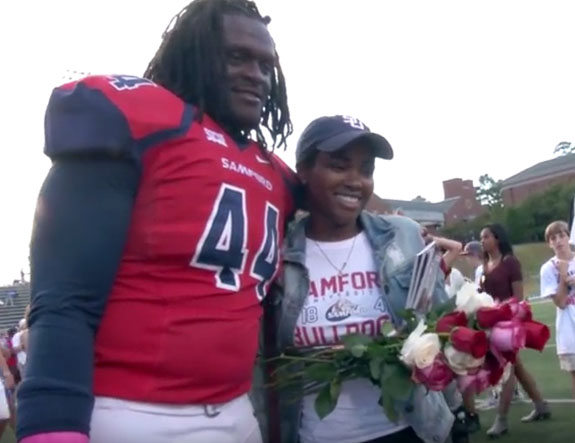 "I told my friend, '[She's] going to be my wife one day.' And then when I got to meet her and got to know her personality, she's the greatest person I know, besides my mom," Pierre said.

Pierre and Henderson are both juniors and will wait until after graduation to get married.

Check out the awesome proposal video below...