The Cleveland Cavaliers commemorated their first-ever NBA crown Tuesday night with super-symbolic championship rings that reflect the spirit of a team that defied all odds to become the first in NBA history to overcome a 3-1 series deficit. 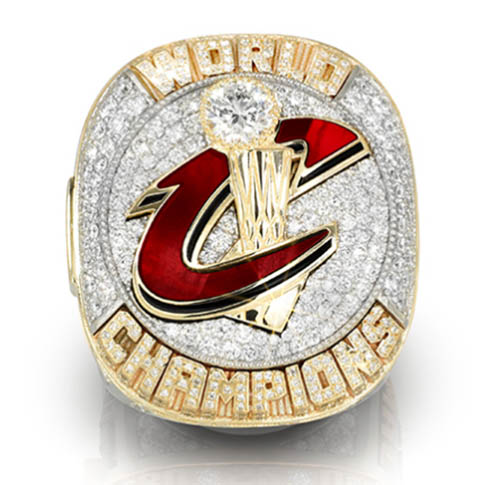 Designed in 10-karat white gold with 14-karat gold accents, the rings are encrusted with more than 400 diamonds weighing 6.5 carats. The massive 165-gram, two-tone rings are the league's heaviest to date.

When the Cavaliers beat the Golden State Warriors in Game 7, 93-87, they completed a thrilling run that delivered to the City of Cleveland its first major sports championship in 52 years. 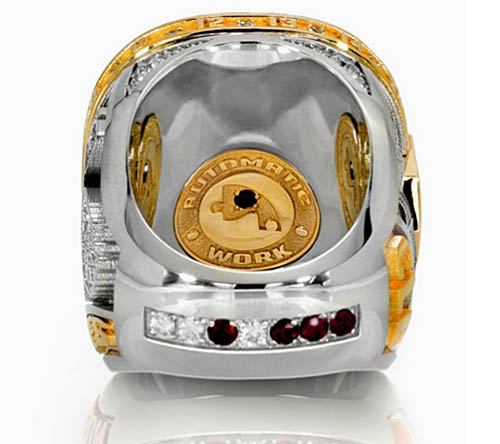 The face of the ring features the Cavaliers' "C" logo carved from a dark red garnet. The "C" has a black drop-shadow that represents the lucky black-sleeved uniforms that helped turn the series around in Game 5.

The basketball atop the Larry O’Brien Trophy on the face of the ring is replaced by a one-carat round diamond, signifying the team's first championship.

The words "WORLD" and "CHAMPIONS" border the top and bottom of the ring in contrasting yellow gold. The words are rendered with 216 diamonds, a nod to Cleveland's area code. Cascading along the right and left edges of the ring are 46 diamonds, representing the number of years the Cavaliers have been in existence.

Encircling the top of the ring are the numbers of each of the players rendered in gold and spaced by a diamond. In addition, each ring has a custom yellow gold banner that features the player's number encrusted in diamonds. The banner hangs over the skyline of Cleveland rendered in white gold. The Roman numerals "LII" sit under the bridge. This represents the 52 years the city had been waiting for a championship. The drought is now "water under the bridge." Also under the bridge are Cleveland's initials "CLE" in raise gold lettering.

The opposite shoulder of the ring shows the player's last name in 14-karat yellow gold along with the championship year of 2016 in white gold. The "0" in the year is replace with the NBA logo. Under the year is the shape of Ohio encrusted with 11 diamonds to signify the number of years the team has been under the current ownership.

On the interior of the ring is one of 16 puzzle pieces and the team's chant, "Automatic Work." The puzzle represents a motivational strategy used by management to propel the team through the playoffs. Each player and head coach Tyronn Lue were assigned a puzzle piece that, when fully assembled, depicted the image of the Larry O'Brien trophy. The team knew that it would take 16 wins (or puzzle pieces) to win the championship.

The black diamond punctuating the puzzle piece is a second nod to the black-sleeved uniforms that sparked the team's turnaround.

The Cavaliers received their rings prior to their victorious home opener against the New York Knicks on Tuesday night. More than 2,000 full- and part-time employees of the Cleveland Cavaliers' organization will receive replica rings.