Birthstone of the Month: 423-Carat Logan Sapphire Has Ties to the Guggenheim Family and an Indian Maharajah

In honor of September’s official birthstone, we shine our spotlight on the “Logan Sapphire,” the second-largest faceted gem-quality blue sapphire in the world at 422.99 carats. Now part of the National Gem Collection, the sapphire is a top attraction at the Smithsonian National Museum of Natural History. 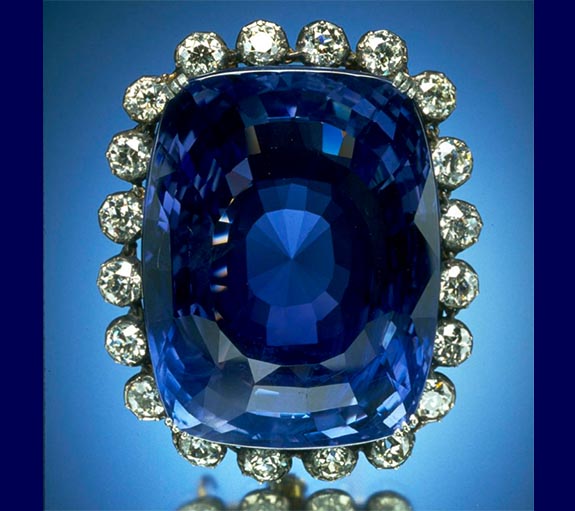 The vibrant medium-blue gem boasts a provenance that links one of America's most prominent families with Indian royalty. The beautiful brooch had been given to Rebecca Pollard Guggenheim as a Christmas/anniversary gift in 1952 by her then-husband Col. M. Robert Guggenheim. The Guggenheims had amassed one of the world's largest fortunes through their mining and smelting businesses, and later became equally famous for their philanthropy.

Rebecca donated the magnificent gem to the Smithsonian in 1960 but kept it in her possession until 1971. Col. M. Robert Guggenheim passed away in 1959 and Rebecca remarried three years later, becoming Mrs. John A. Logan in 1962. This is where the Logan Sapphire gets its name. The gem finally went on display in Washington, D.C., in June of 1971.

Col. M. Robert Guggenheim reportedly purchased the gem from Sir Ellice Victor Sassoon (1881-1961), the third Baronet of Bombay. The Sassoon family had acquired the gem from a maharajah in India.

Set in a silver-and-gold brooch and framed by 20 round brilliant diamonds weighing approximately 16 carats, the cushion-cut Logan Sapphire claims the distinction of being the heaviest mounted gem in the National Gem Collection. It was cut from a crystal mined in Sri Lanka in the mid-1800s and possesses a beautiful blue color with slight violet overtones.

The impressive color led skeptics to question whether the gem had been heated or treated in any way. The Gemological Institute of America put those doubts to rest after studying the gem and stating in a report dated June 1997 that the Logan Sapphire was completely natural.

Historically, the finest and most vibrant gem-quality sapphires have come from Sri Lanka, Burma and the Kashmir region of India. According to the Smithsonian, sapphires from Sri Lanka are typically light to medium blue and are commonly referred to as "Ceylon Sapphires."

Interestingly, all sapphires are made of the mineral corundum (crystalline aluminum oxide). In its pure state, the corundum is colorless, but when trace elements are naturally introduced to the chemical composition all the magic happens. Blue sapphires occur, for instance, when aluminum atoms are displaced with those of titanium and iron in the gem’s crystal lattice structure.

Sapphires are seen in many colors, including pink, purple, green, orange and yellow. Ruby is the red variety of corundum.