A viral Kiss Cam video allegedly showing a fan proposing to his girlfriend during Saturday's Atlanta Hawks basketball game — but then dropping the ring — has been exposed as a hoax by the team's beat writer. 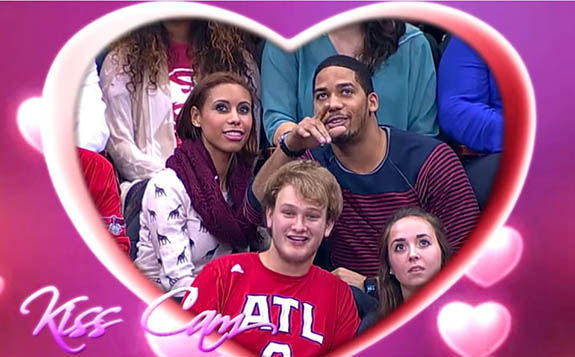 In the 95-second video posted by the team, a bunch of handsome couples are gladly taking part in the Kiss Cam ritual — a fun diversion often seen on the Jumbotron during breaks in the action. After the last couple obliges the camera with a kiss, the young man takes advantage of the moment by getting down on one knee to propose to his girlfriend.

He presents her with with a diamond ring, but just as she's about to say "Yes," another fan congratulates the suitor with a jarring slap on the back. The ring goes flying and disappears under the seats.

The video ends with the future bride-to-be threatening to slug the guy who caused the fumble and a bunch of fans in the section scrambling to find the ring.

On Saturday night, the Atlanta Hawks published the video on YouTube.com with the following caption: "A fan tried to propose to his girlfriend at our game on Saturday, but it all went wrong when he dropped the ring." The next afternoon, the Hawks posted the same video to its Twitter account.

The video quickly went viral, with media outlets around the world jumping on the story. The video on YouTube.com garnered more than 300,000 views.

Some YouTube and Twitter users were quick to point out that the video seemed staged, that the Kiss Cam participants seemed to be acting, especially in the last scene with the lost ring.

Those suspicions were confirmed on Monday when Atlanta Hawks beat writer Chris Vivlamore of The Atlanta Journal-Constitution took to Twitter to shed some light on the story.

"To the many — including several outlets — this is FAKE," he wrote. "It's a bit that runs often during games. Any contrary thoughts or info is false."

Those in the know pointed to the fact that pre-recorded Kiss Cam skits have been used by the team frequently over the past 10 years. They also noted that leveled camera angle, pre-2016 Hawks gear and bad acting should have all been giveaways.

Even though the Hawks' Kiss Cam proposal was likely staged, the in-game proposal we covered in late September was very real. You may remember the surreal engagement ring fumble caught live on the Jumbotron at Yankees Stadium. It was also broadcast in real time on ESPN and the YES Network. After about five heart-thumping minutes, the bride-to-be finally spotted the ring in the cuff of her blue jeans.

Check out the Atlanta Hawks' video below, and see if you agree that the vignettes seem staged...