Conor McGregor, one of the most feared mixed martial artists in UFC history, revealed his sensitive side Saturday when he and his longtime girlfriend, Dee Devlin, announced their engagement on McGregor’s Instagram page. 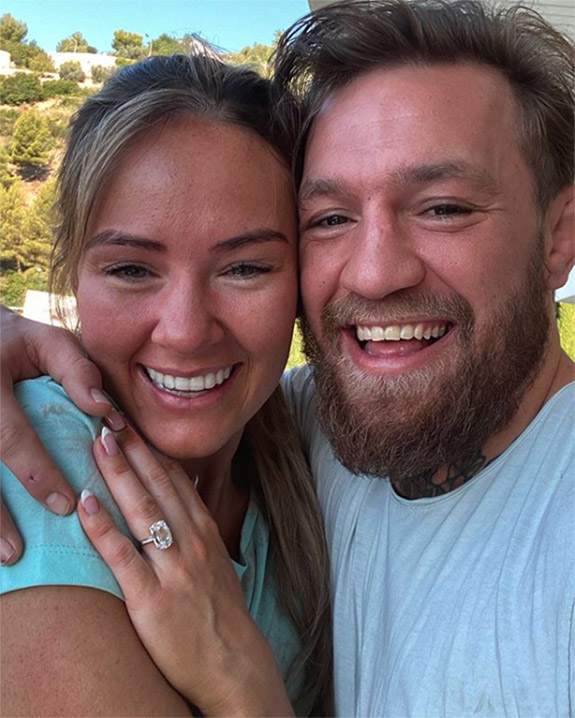 In a photo captioned, “What a birthday, my future wife,” McGregor and Devlin are seen smiling ear-to-ear as the bride-to-be rests her left hand on her right shoulder so her new emerald-cut diamond ring can share the spotlight. The stone appears to be framed by a halo of small diamonds and set on a diamond band. McGregor popped the question on Devlin’s 33rd birthday weekend.

Devlin’s emerald-cut diamond is right on trend, as many high-profile celebrities have preferred the stepped-cut, rectangular shape that shows off the diamond’s clarity.

Just last week, Heather Rae Young told her Instagram followers that she is “absolutely obsessed” with her the 8.08-carat emerald-cut diamond she received from HGTV’s Tarek El Moussa. Just a week before that, songstress Demi Lovato thrilled her fans with romantic Instagram pics of her Malibu engagement to actor Max Ehrich, who proposed with a massive emerald-cut diamond ring.

A two-division UFC World Champion, the recently retired McGregor has frequently credited Devlin, his partner of 12 years, with much of his success.

“My girlfriend has been there since the start,” he told the Irish Mirror in March 2016. “She has helped me throughout this career. If it wasn’t for her, I probably wouldn’t be where I am today.”

The Irish MMA fighter announced his retirement this past June. He had stepped away from the ring and, subsequently, returned on two previous occasions.

In 2015, McGregor captured the UFC Featherweight Championship by knocking out his opponent 13 seconds into the first round. He was also the first UFC fighter to hold titles in two weight divisions at the same time.

The couple has yet to announce a wedding date. In 2017, McGregor and Devlin became parents to their son, Conor Jr., and in early 2019, they welcomed a daughter, Croia.